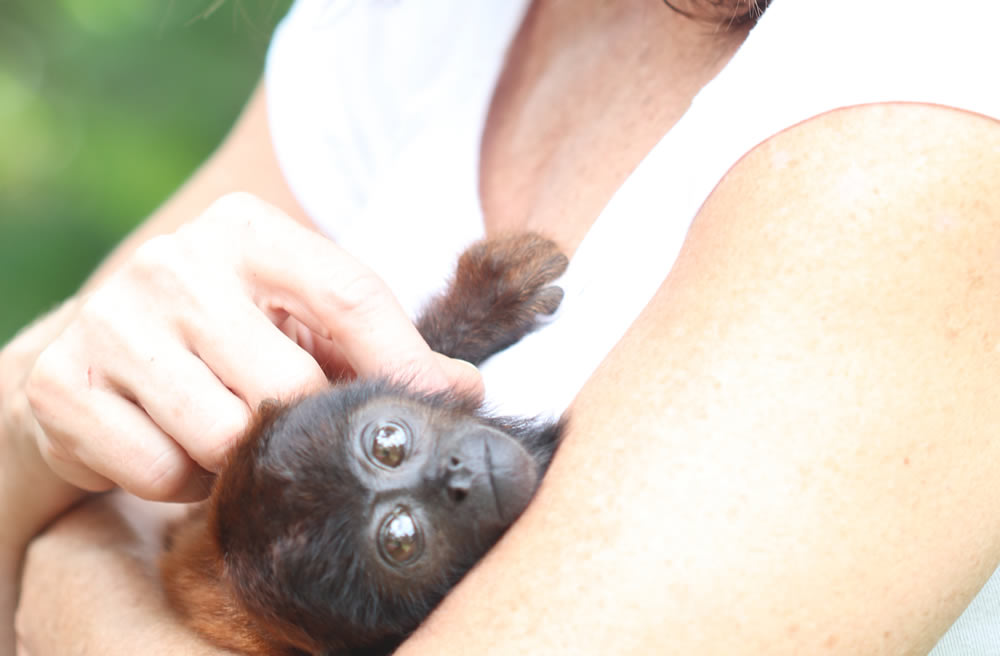 Sometimes you have an encounter that changes you forever. This past December I met Rosie and my heart will never recover. Rosie was still a baby but already she had experienced incredible trauma. She watched her own mother killed and eaten. Then she was sold to be someone’s pet. Her “owners” kept her in poor conditions — she was collared and tied to a post and underfed. When I met her she was broken mentally and physically. She was so depressed she wouldn’t eat. I spent hours coaxing her to eat tiny little morsels.

On her last day on earth, I held her and cried, trying to give her comfort. Government officials were on their way to euthanize her. She had contacted a contagious virus from the humans who’d kept her as a pet. Because of this, she was deemed unfit for a rehabilitation program. She was sentenced to death.

Red Howler monkeys like Rosie are facing serious population declines in the Amazon rainforest. They’re poached by hunters and eaten, or the babies are targeted by pet traffickers. Poachers in search of a baby will kill the entire family to capture a baby.

When I left Rosie for the last time, I kissed her tiny head and told her that not all humans were evil and there were many of us who loved her and wished we could have protected her. I also made her a promise: I promised her I would work harder to prevent poachers and smugglers from carrying out these heinous acts. I’d work harder to raise money to purchase more land and I would raise money to hire teams of forest rangers to patrol those lands and ensure her cousins remained safe.

Please join me in my promise to Rosie by giving a gift toward our land acquisition fund or our forest ranger program.
We must take action before the Amazon rainforest is drained of its primates, with the remainder held captive as pets or in zoos.