Tambopata is world-renowned for its unusually high biological diversity.  Some examples of the incredible number of species recorded here:  over 1,200 types of butterflies (a world record), 592 of birds (also a world record), 127 of amphibians, 103 of mammals, 74 of reptiles.  In a single hectare of rainforest, 300 different tree species have been recorded.

This area has the highest concentration of known avian clay licks in the world.  It is also where the world’s largest known mineral clay lick is located with a height of 50 meters and a length of about 500 meters.  This is a gathering spot for hundreds of parrots and macaws of up to 17 different species.

Many endangered species (giant river otters, harpy eagles) as well as vulnerable species that are rarely found elsewhere in the Amazon jungle because of poaching (anacondas), can still be found here. The density of top predators like the jaguar and large-bodied primates is among the highest on Earth.   In addition, the area features a major diversity of plant life, including forest species (cedar, mahogany) that have been logged to extinction in most parts of the Amazon. 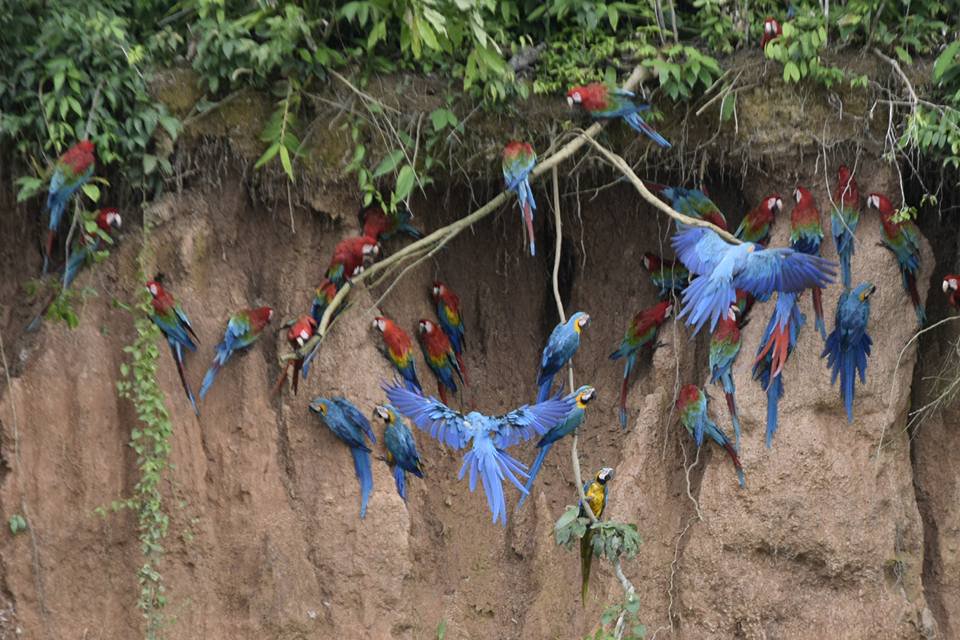 WHAT ARE THE ENVIRONMENTAL CHALLENGES FACING TAMBOPATA?

High commodity gold prices have fuelled a massive increase in illegal gold mining activities in Tambopata.  A study published in the Proceedings of the National Academy of Sciences (PNAS) in 2013 found the rate of deforestation in this region of the Amazon has jumped from 5,350 acres a year prior to 2008 to 15,180 acres per year since 2008. Gold miners cause additional environmental damage with their use of mercury.  The Peruvian Government estimates 30 to 40 tons of mercury are dumped into the Amazonian rivers each year. A 2013 study directed by Luis Fernandez of the Carnegie Institution for Science found high mercury concentrations not only in the fish sold in the markets of Puerto Maldonado (a major city surrounded by mining sites in Tambopata) but also in the residents themselves.  Mercury is a potent neurotoxin damaging the brain, central nervous system and major organs.  At extremely high exposure levels it has been documented to cause paralysis, insanity, coma and death.
Tambopata features many forest species of economic importance such as cedar, mahogany, brazil nut and palm trees.  Large quantities of these trees are felled illegally and shipped internationally to be used for furniture, flooring and boats.  Although many developed countries have banned imports of illegally harvested wood, the lack of enforcement has not slowed down this practice.  Furthermore, the pressure on these rare hardwoods has increased in recent years as neighbouring Brazil has begun to crack down on illegal logging.
In “slash and burn farming” a plot of trees is cut down and burned; the remaining ash provides nutrients for the soil. After just two consecutive years the soil loses its fertility and the farmer has to move on to clear and burn a new patch. This practice leaves behind destroyed ecosystems where numerous plants, insects and animals once thrived. It can take up to 20 years for the land to recover and be useful again, while extinction of certain species is permanent.